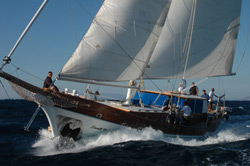 Blue Cruises really took off in the 1950's with a team of Turkish intellectuals, not only did they start something that many others would follow but they wrote far and wide of their travels and experiences, enticing others, ever since the industry has evolved into one of the worlds leading yacht charter sailing destinations.

The adventure began on gulet boats that were previously simple fishing vessels, however as demand grew these boats evolved and developed into the comfortable floating hotels that we see today. With Turkey's fantastic climate the sailing year is long and warm, the waters clear and inviting. We sail to some of the most beautiful parts of the southern coastal waters. Sailing in Turkey has now become one of the worlds leading sailing destinations.


Bodrum:
An ancient settlement located in the southwestern Aegean region of Turkey, Previously named Halicarnassus and the site of one of the seven wonders of the ancient world the ''Mausoleum of Mausolus''. Today the harbour is dominated by the 15th century Bodrum castle, built by the knights of the crusades, a great place to visit that also has a museum and host various festivals throughout the year. Some of the nearby small towns of Turgut Reis, Gumusluk, Yalikavak and Golturkbuku are also worth a visit, artistic, pretty and quaint where you will find sailing boats anchored side by side.


Bozburun:
Located on the southwestern coast of Turkeys Mediterranean waters, the Bozburun peninsula is still unspoilt and continues to hold on to the traditions and charm of days gone by. The peninsula carries the same name as the main town of Bozburun and the coastline is greatly indented making it one of the most popular sailing spots for those who want to enjoy solitude, here you will find many secluded bays and small islands, this peninsula is connected and part of the greater Marmaris peninsula. With its close proximity to the Greek islands, the Bozburun peninsula has plenty of ancient ruins scattered throughout.

Marmaris:
Originally a sleepy fishing village, however during the 80's the tourism industry exploded and little is left of the old village. One of the most well known activities is sailing, there are 2 large main marinas and several smaller ones, the proximity to the international airport of Dalaman is also a factor to this resorts popularity, Marmaris is located on the waters edge surrounded by pine forests where rain almost never falls between May and October. The guaranteed hot dry summers are exactly why tourism has been so successful here, and even the winters are relatively mild, In ancient times Marmaris was invaded by Alexander the great, and the castle has stood in one form or another since 3000 BC.


Gocek:
A small but pretty town with six large marinas where the elite of Turkey prefer to sail and anchor their exclusive yachts, located between the towns of Fethiye and Dalyan, Gocek is a wonderful place to spend a sleepy Sunday, strolling through the main street and spending time in the many boutique style shops. Legend tells that it is in the sea at Gocek that Icarus landed after escaping his imprisonment from the tower. Gocek was declared a protected region in 1988 therefore preventing any high rise buildings from being built, With over 300 days of sunshine Gocek appeals to many with a permanent population of approximately 4,500 the numbers rise in the summer months to well over 7000.


Fethiye:
This busy, thriving town sits on the ancient site of the city of Telmessos, Today the population is approximately 196,000 and during the summer months the numbers swell as many tourists come to the resorts of Olu-Deniz and Calis, its proximity of just over 45 kilometres to Dalaman international airport makes it an ideal destination There is a large marina where blue cruise sailing tours can be seen leaving everyday, and the famed Baba-Dag mountain attracts paragliders from all over the world. The ancient Greek village of Kaya Koy is also to be found nearby, with great restaurants and wine-houses, this village is a must see with houses that have stood as a monument to history since 1923 when the Greeks that lived there where sent back to Greece and the Turks who lived in Greece were brought back home. Today as you enter the harbour of this stunning town, before you on the mountainside you can see the remains of the castle and the tombs of King Amintas, there is also a large Hellenistic amphitheatre which is under renovation built in approx 31 BC, in its hay day it had a seating capacity for 6000 spectators. Along from Fethiye are the beauty spots of Olu-deniz and Kelebek Vadisi (Butterfly Valley).


Kas:
Located in the province of Antalya, Kas is a pretty fishing village, situated on a steep incline where the houses are perched from the waters edge, making their way high up the mountain slopes, over the years Kas has grown into a pretty town with a few shops, guest houses and restaurants, Yachting and tourism are the main sources of income and it has an ever growing reputation as one of the leading areas for diving, due to the clarity of the waters and the varied marine life here. Surrounded by pine hills other local crops are oranges, lemons, bananas, almonds and the production of honey.


Kekova:
This island is on the blue cruise route and a must see destination within this region, located within the province of Antalya. Mostly known and visited because of the ruins of the sunken city of Dolchiste, which, due to the movement of tectonic plates and the subsequent rise of the nearby mountain range, were slowly pushed into the sea, since 1990 this area has been protected and no swimming or diving is allowed to further preserve the city, however as the waters are so clear the city can be seen clearly from the side of a boat. The nearby village of Kalekoy is where you will find Simena castle, a short walk will take you up to some of the most amazing views and sunsets that will stay with you forever.

Demre:
Named after the river that runs through it Demre is located in the province of Antalya, the ancient name of this town was Myra and its here that the story of Saint Nicholas began and the legend of Santa Claus took form, Surrounded by pine forests, this region relied on agriculture before tourism emerged in the 1980's, fruits are still grown here and greenhouses can be seen all over this area with Pomegranates being one of the fruits that are prolific. Between 168 BC and AD 43 Myra (Demre) was one of the most important towns of Lycia, and evidence of this ancient civilization can be seen throughout the region with ruins of rock tombs and carved tombs that can be visited, According to the biblical text of Acts both Luke and Paul changed ships here during their journey from Caesarea  to Rome, The Church of St Nicholas of Myra was built in the 6th Century and houses the tomb of St Nicholas.

Throughout this entire region and with every step you take you will find yourself amongst some of the worlds oldest ancient ruins, such as the great city of Ephesus to the flaming mountain rocks of Olympos, there are lively busy towns, alongside quaint villages that seem to be lost in time.

Whether its your first time sailing or you are one of our valued customers that come back year after year, we can take care of every detail for you, from booking your charter, to making sure you have reliable airport transfers, food shopping services, to helping with accommodation before and after your cruise.